For those of you who live in Southern Alberta you will understand where I am coming from. We just received an early, heavy winter storm and most of us were taken by surprise by the heavy, wet snow that blanketed our environment.  As I frantically worked in my backyard to save my tree from losing major branches under the weight of this heavy snow, I reflected on the fact that this tree and it’s struggle to hold the weight of the snow was similar to my experience in life in the past years.

I arrived home and went to my backyard and noticed that the single tree I have was majorly being pulled down by the weight of the falling snow. As the tree still had all of its leaves the accumulation was just too much weight for the tree to handle. I knew I needed to do something! I was feeling a sense of panic as it was still snowing outside and the tree was continually getting weighed down. I didn’t want to cut the tree… I had been nurturing it for years! I had rescued it from aphids’ infestations numerous times, brought it back from the brink, not to mention the countless arguments I had with my husband who wanted to cut it down. I had fought for this tree and I was not going to let it die because of this storm. This led me to the decision I had to cut off some of it’s beautiful branches in order to save it. I am someone who finds nature naturally beautiful and I do not like to mess with it unless I have to, so this decision was not an easy one for me. 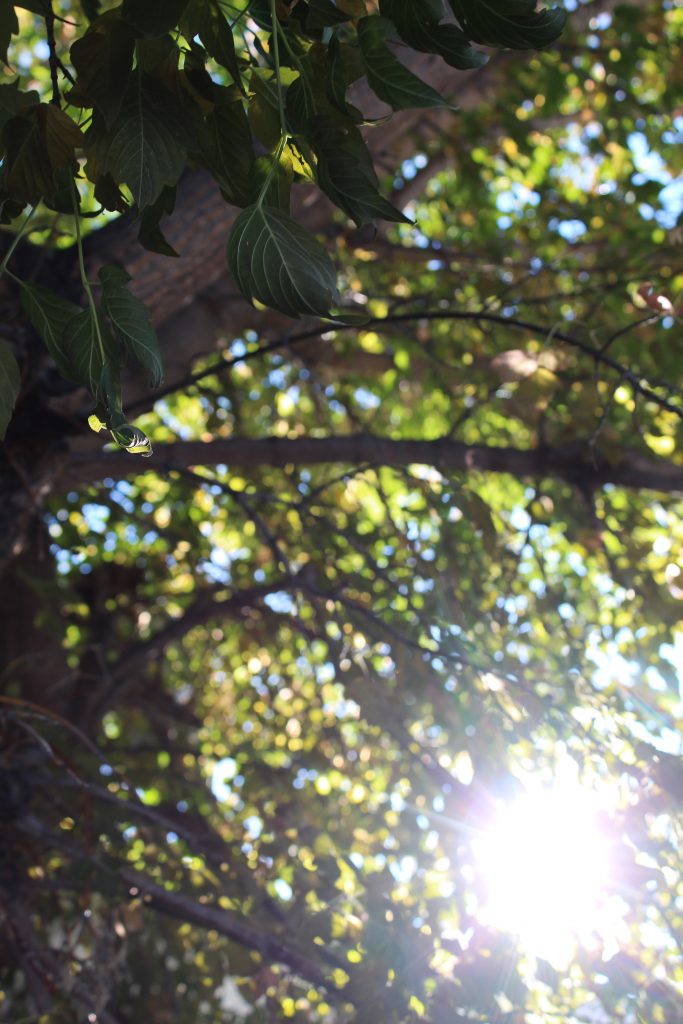 When I took the shears to the first branch I hesitated… I really didn’t want to do this but I felt like I had no choice. I had to cut. So, I did, …. SNIP…. and the first branch fell to the ground. As silly as it sounds I felt bad for the branch that now lay at my feet I had taken away it’s source of life and now it was doomed. Taking that in for a second I turned to the tree, sucked it up and made another cut, all the while still feeling this sense of urgency as the snow was still falling. The next branch I took on was a huge one. It took a lot of strength and effort on my part to get this huge branch dissected from the tree but when it fell, the main branch bounced back up. This was a welcome sight as I now could see the good that all of this tree trimming was doing for the tree overall. So, despite how it was losing parts of itself, it was gaining a stronger foundation. I continued with less hesitation now. Soon my mother arrived with a saw and we ended up taking off some huge branches and every time we made another cut, the tree bounced back against the weight of the storm. After an hour, I had pruned my tree taking off some major branches and overall, I had saved the tree. I was cold and wet from doing this work in the midst of the heavy, wet snowfall. There was a sense of satisfaction as I looked at the branches laying on the snow-covered ground but also a sense of sadness for the parts of the tree that were now dying. 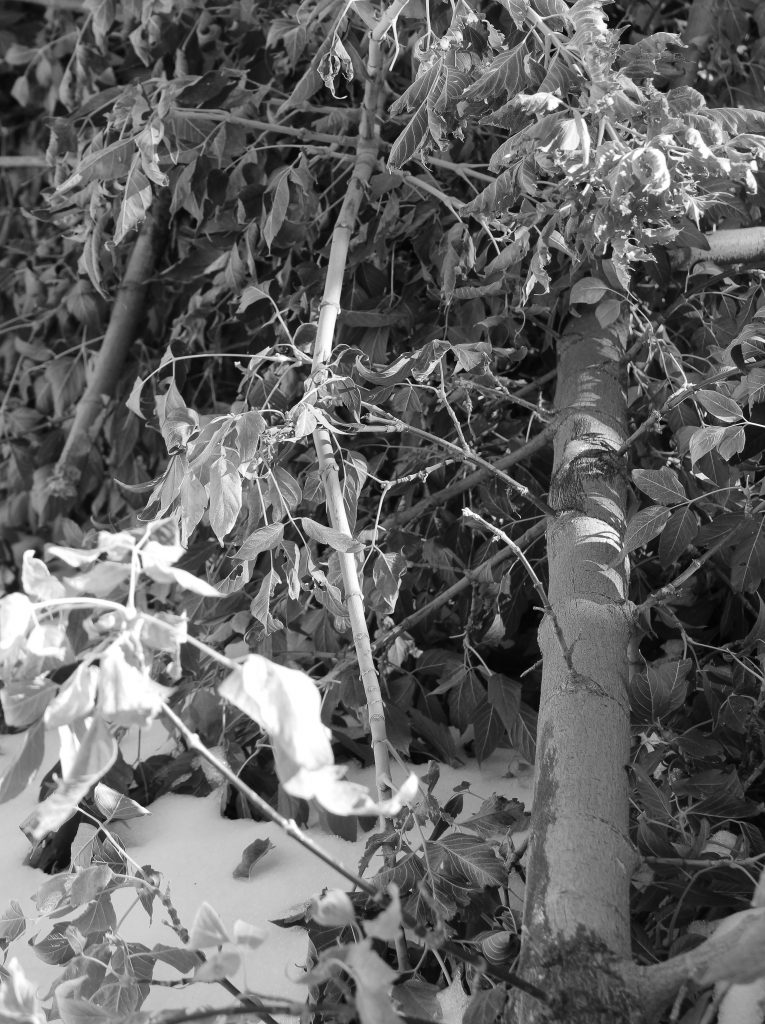 This experience really brought out a lot of self-reflection in me.  About how this tree is a direct reflection of my life over the past couple years. I too had been hit by a big storm, and in the midst of the storm and after the storm I had to make some pretty hard decisions on what I was going to let go of so that I too could survive. Even as I write this, I can see more correlations in this experience. It was like the universe had provided me with this opportunity of tree cutting to see my life play out and recognize that I had made the right decision. Trimming things out of my life that were dragging me down was the best thing that I could have done for myself.

When I started with trimming the tree and revaluating my life, it was not easy to let go of these old beliefs, these old patterns of behavior and these old stories. In fact, it was quite difficult at times. Most of them had been in operation in me for years and I had learned to accept them. They were functional or at least I had made them that way, but now I was given this opportunity to release them! They no longer served who I wanted to be – who I had really always wanted to be. This visual of the tree branches being pulled down by the weight of the snow was exactly how I was feeling in life I was holding myself back and weighing myself down by outdated stories that I kept telling myself. Just like with the tree, the first cut was the hardest but once I started and could see some improvement then it became a little easier. There were some branches that were really big as they were wound into so many aspects of my personality. These branches took a lot of perseverance and strength to let go of. Some of these things that I found the hardest to get rid of in my life took as much mental strength to let go of as it took physical strength with the tree.  And just like in my life, there were some branches I couldn’t do on my own. I had to put my trust and faith in others to support me and, luckily, I have an amazing support network that was up for the challenge. 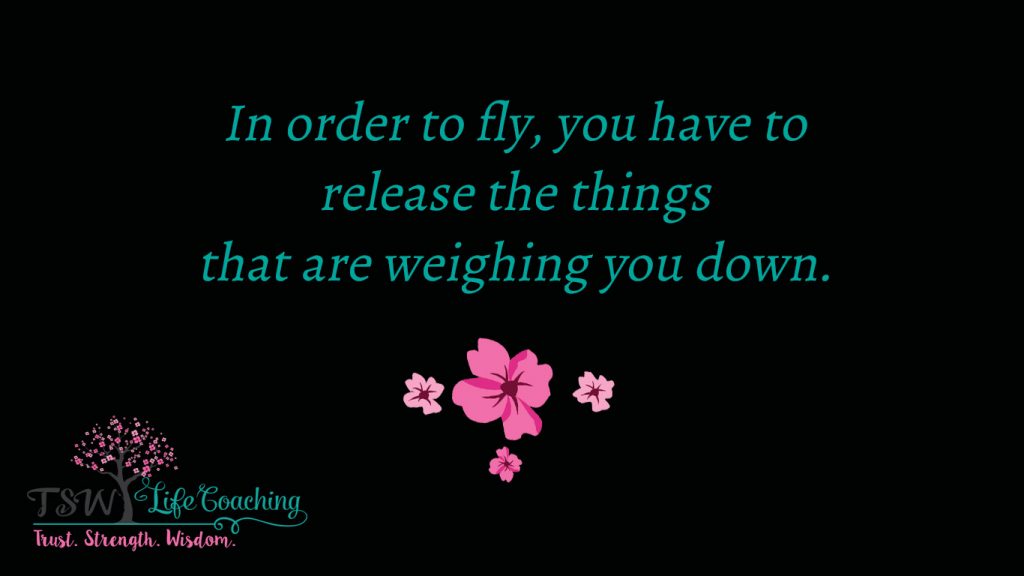 Just like the tree, I was faced with something that could potentially have ruined me. But instead of just giving up, I grabbed the shears and started taking off the things that were holding me down. I am happy to report that my tree survived the storm just as I have survived the storm in my life. And both my tree and I are stronger now, probably stronger than we have ever been. As I stood there looking at the pile of cut branches and felt such a sense of accomplishment, I had saved the tree and I had saved myself! Sometimes the universe gives you a storm that looks devastating, one that looks like it could literally take you down, and in the end, it turns out that the storm was exactly what you needed. It was not something to fear or hide from but rather an opportunity to do some trimming!

I hope if you find yourself in a storm, that you take a second to realize that it may look bad at the moment, but it doesn’t have to be as devastating as we are anticipating!