One of the most overlooked and important lessons we can learn on our journey in life is the lesson of forgiveness. I recognize this is something a lot of people struggle with, but I believe that when we are not able to forgive, we are unnecessarily holding onto negative energy. This negative energy hinders our ability to create a happy life. Really, our lack of forgiveness, in my opinion, robs us of our happiness. Most times we chose not to forgive and hold a grudge because we believe we have been slighted in some way but, the crazy thing is, most times the grudge we are holding is only hurting us! 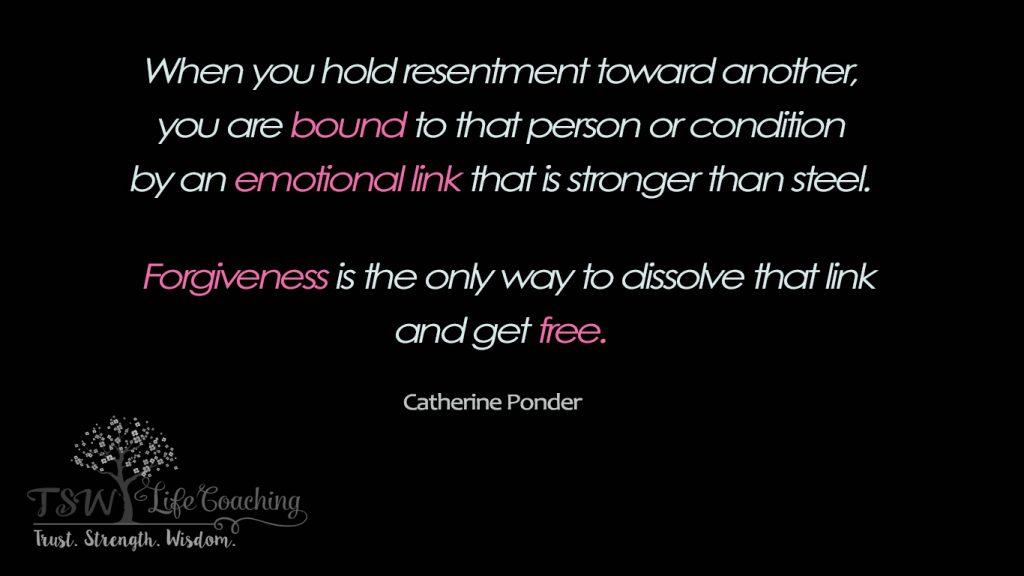 One of the biggest problems that I hear about forgiveness is that people feel that if they forgive someone then they are condoning what the person has done. This could not be further from the truth. When we forgive someone, we are not saying “What you did is ok”, rather we are saying “I don’t want to hold on to this so I am letting it go and forgiving you”. When we hold back forgiveness, what we are really saying is “I want to hold on to this negativity” and most times the other person doesn’t know or isn’t even affect by us holding a grudge, that means we are the only ones suffering!

Another reason we don’t forgive is that we are still feeling the negative feelings associated with the slight. We are holding on to feelings of anger, upset or betrayal. That means we are choosing to hold on to those feelings and that is not healthy for us. I do understand that there are things that may have happened that have hurt you deeply, but by holding on to those feelings you are continuing to harm yourself! As I have discussed many times holding on to negative feelings is toxic to our bodies, minds and souls. If you look at it from that perspective forgiveness starts to look like a better option.

On the positive side when you are able to forgive, you are releasing the negativity that is associated with the event. You are able to use your energy for more productive and positive things, things that bring you joy rather than reliving the pain. By choosing forgiveness we are also releasing all our judgements about the person that slighted us and are bringing more compassion and understanding in the world.

One key thing to remember about forgiveness is that we are not necessarily doing it for the other person, rather we are doing it for our own sense of well-being, and that makes it worth the effort! In fact, to experience the positive side of forgiveness we don’t even have to tell the other person we are forgiving them we can simply choose to let it go and forgive. If you do feel that you need to speak the forgiveness and share your feelings with that person, that is great too, but not a requirement.

Hopefully after reading this you can see that by holding a grudge you are harming yourself and that forgiveness is the path towards a happier life. If so, then you are halfway there and you have done the hardest part.

How to Practice Forgiveness 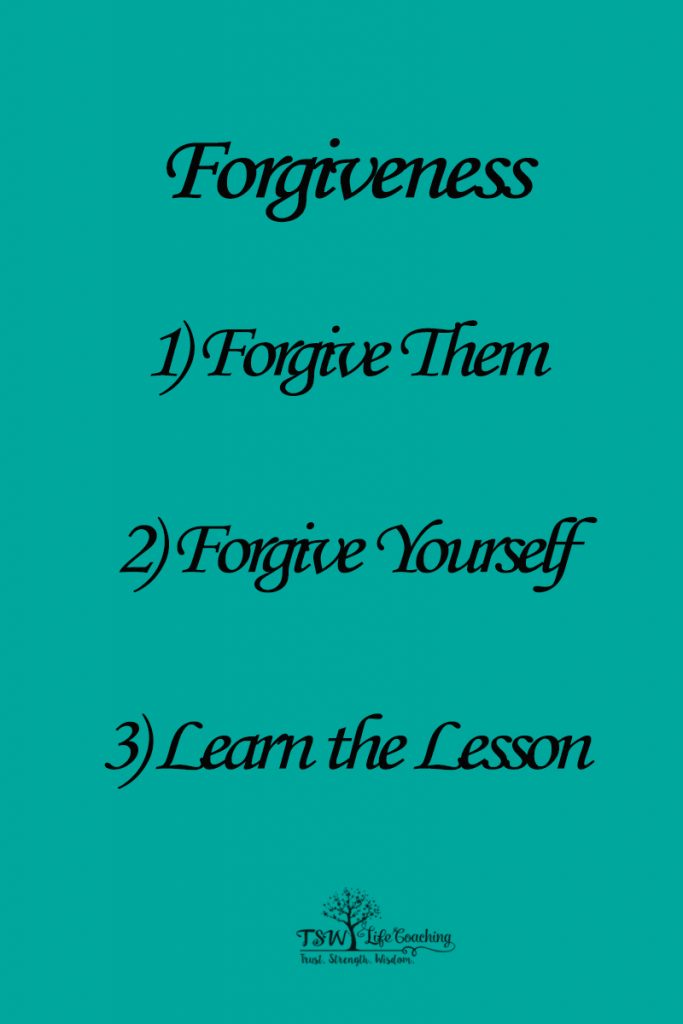 When you decide you are ready to forgive, there are some simple steps that you can take to practice forgiveness.

Come up with a formal statement that you can say out loud to the person or to yourself that expresses your forgiveness. For example, “I forgive you (name) for (perceived hurt)”. It may be helpful at this point to vocalize your experience of the event, something like “I was really hurt when you said that to me”, or “I was angry when you did that”. Be sure when you are speaking about your feelings that you own them by using “I” statements.

If you are struggling with this, here is something to think about: Most of the time, our anger or perceived hurts come from people not living up to our expectations of them and not really what they did. An example of this is if we believe that our spouse should remember our anniversary because it is important to us, then we expect them to remember the date and when they don’t, we are upset because we believed they should have. Usually when this happens we start creating a story around how inconsiderate he is and how much he doesn’t care about our anniversary because he doesn’t care about our relationship. The fact is they forgot a date, that’s it. And honestly who hasn’t forgotten a date before?

Beyond that, if you take the emotions and the story out of it and look at the whole picture from a place of understanding, then you may recognize there were other factors involved, like he has been preoccupied with a big project at work or he is never good at remembering any dates. All of these reflections on the situation can help you get to the point where forgiveness feels easier.

This step may come as a surprise to you, but a huge part of forgiveness is being able to forgive our part in the situation. At first look we may feel like we did nothing, but we played a part in the situation no matter how small we had a part in it. In the example above, your part may have been knowing that your anniversary is important to you and he always forgets. You chose not to remind him or put it on the calendar. Or maybe your part was that you had unrealistic expectations and placed a lot of emphasis on him remembering and that set you up to have hurt feelings when he didn’t. However small, recognize your part in the event and forgive yourself. Formally state “I forgive myself for (your part)”.

Most times when we hold a grudge we are also holding on to negative feelings around our part “I should have known better”, “I didn’t listen to my intuition”. I want to make it really clear that this is not about blaming yourself, rather it is about recognizing how your choices influenced the event. When we can recognize our part from a non-judgmental place then we have the power to choose differently next time.

Now that you have forgiven, the last step is to learn the lesson. Whatever information you have gleaned from your reflection on the situation can provide you with a lesson to avoid future hurts. Like in the above example, knowing that your anniversary is important to you and knowing that he forgets dates regularly, you can choose to arrange the date yourself and send him an invite or maybe you choose to plan it together around the dinner table, or maybe you recognize that it is really not that important and you decide to just let it pass. Whatever the outcome, you are making the choice from a place of clarity and that is empowering! 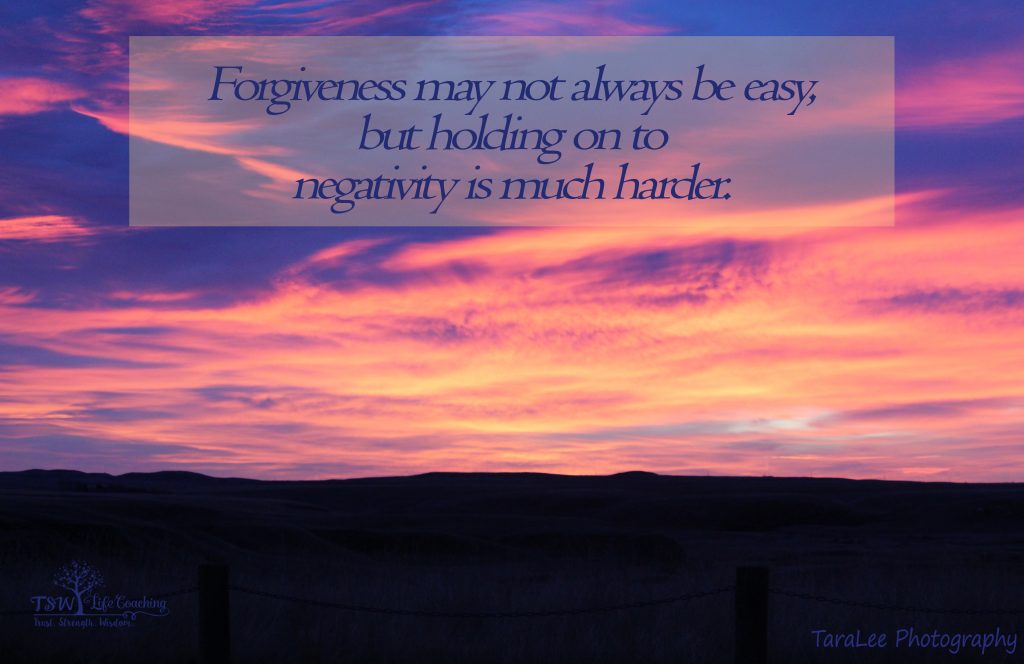 Once you have accomplished these three steps then you have been able to release the negativity associated with the event and you have practiced forgiveness. I know the example I gave here was a simple one, but you can use these steps for deeper hurts too. If you are a grudge holder then it may take some practice but start small and work your way up to the more significant hurts. If you regularly practice these steps they soon will become automatic and you will be able to forgive much easier.

Forgiveness may not always be easy when we feel we have been slighted, but the consequence of holding on to negativity is much harder in the long run!